2018 Thaler, Mathias. “Reconciliation through Estrangement.” forthcoming in Review of Politics. 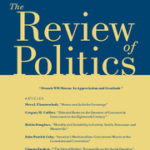 This paper explores the ways in which reconciliation can be furthered through estrangement. While it is often assumed that reconciliation culminates in the comprehensive resolution of conflict between deeply alienated parties, the paper argues that reconciliation can in fact only be achieved through complex mechanisms of estrangement that reveal alternative vistas for collective renewal. Art performs an important role in this process. The paper theorizes estrangement as both an artistic and a political technique that can have world-disclosing, rather than alienating effects on its audience: what Svetlana Boym calls estrangement for, rather than from, the world. I then try to tease out the implications of this insight by examining the South African theatre piece Ubu and the Truth Commission, which employs a number of estrangements devices – from life-sized puppetry to found footage – in order to problematize the ambiguities and uncertainties of the post-Apartheid transition period. By subverting audience identification, yet triggering emotional contagion, the play imaginatively opens up the possibility of a common world in which agonistic relations are productively negotiated, rather than fully suppressed.
Download a pre-print version of the paper.

This paper reconstructs the place of utopia in realist political theory, by examining the ways in which the literary genre of critical utopias can productively unsettle ongoing discussions about “how to do political theory”. I start by analyzing two prominent accounts of the relationship between realism and utopia: “real utopia” (Erik Olin Wright et al) and “dystopic liberalism” (Judith Shklar et al). Elaborating on Raymond Geuss’s recent reflections, the paper then claims that an engagement with literature can shift the focus of these accounts. Utopian fiction, I maintain, is useful for comprehending what is (thus enhancing our understanding of the world) and for contemplating what might be (thus nurturing the hope for a better future). Ursula K. Le Guin’s novel The Dispossessed deploys this double function in an exemplary fashion: through her dynamic and open-ended portrayal of an Anarchist community, Le Guin succeeds in imagining a utopia that negates the status quo, without striving to construct a perfect society. The book’s radical, yet ambiguous narrative hence reveals a strategy for locating utopia within realist political theory that moves beyond the positions dominating the current debate. Reading The Dispossessed ultimately demonstrates that realism without utopia is status-quo-affirming, while utopia without realism is wishful thinking.

This paper develops a framework for assessing thought experiments in normative political theory. For thought experiments within the realm of practical – as opposed to theoretical – philosophy to gain any “imaginative grip” at all they must be action-guiding. This means hypotheticals ought to assist their addressees in making judgments about real-world dilemmas, even if they purposefully depict a possible world that is remote from reality. Against the widely held assumption that thought experiments are exempt from criticism because they only engage the readers’ imagination, the paper argues that we should distinguish between relevant and irrelevant hypotheticals. This distinction is made according to a criterion of modality: while far-fetched, the former construct imaginary cases that are possible for us, here and now, the latter conjure up imaginary cases that are barely conceivable at all. To establish this claim, the paper interrogates, via a discussion of Susan Sontag and Judith Butler’s accounts of representations of violence, the frames through which hypotheticals construct possible worlds, and concludes that some frames are better than others at sustaining a link with the world as we know it. Frames that disrupt this link can be charged with failing to offer action-guidance.

This paper seeks to contribute to the growing literature on pragmatism in political theory by revisiting the role of moral absolutes in politics. More specifically, I propose the idea that pragmatism can support a particular defence of the ban on torture. In contradistinction with deontological accounts, I will argue that the principles underlying the ban on torture should not be construed as transcendental values that impose external constraints on political action, but as constitutive rules that emerge from, and are sustained by, a web of intersecting social practices. While pragmatists vehemently reject the introduction of absolutes in politics, their anti-foundationalist conception of reasoning crucially hinges on the sustainability of adjustable banisters along which judgments are formed. The paper suggests that the torture prohibition ought to be re-interpreted as one such banister.

This paper examines the role of time in Just War theory. It maintains that contemporary Just War theory’s legalist focus on rules and principles, rather than judgment and interpretation, makes a serious engagement with timing appear quite irrelevant. To deal with this shortcoming, the paper clarifies the dual nature of political time as both chronos and kairos. It is argued that a cogent account of the justice of warfare needs to incorporate the two faces of political time. I show that a casuistic re-orientation of Just War theory would also have the beneficial effect of putting critique back on the agenda. The moral core of my argument is that judgment and interpretation ought to be guided by the spirit of “pragmatic fallibilism”, thereby combining the willingness to assertively uphold one’s values with a disposition to revise, through reflection and deliberation, one’s commitments.

This article deals critically with the process of coming to terms with ‘genocide’. It starts from the observation that conventional philosophical and legal approaches to capturing the essence of ‘genocide’ through an improved definition necessarily fail to adapt to the ever-changing nature of political violence. Faced with this challenge, the article suggests that the contemporary debate on genocide (and its denial) should be complemented with a focus on transforming the perceptive and interpretive frameworks through which acts of violence are discussed in the public sphere. The main purpose of this article is to contribute, from the vantage point of political theory, to this debate by offering a novel normative perspective on negative reactions to genocide. Hence I argue that it is productive to speak of ‘genocide blindness’ in cases when the members of the public sphere are simply incapable of seeing an instance of violence as genocidal. To establish this claim, the article introduces Ludwig Wittgenstein’s reflections on ‘aspect-seeing’ so as to underline the importance of changing the way that political violence is perceived and interpreted. In a second step, the article turns to María Pía Lara’s theory of storytelling as a concrete mechanism for triggering and instituting this kind of change.

This review essay strives to cast a critical, yet admiring, look at Larry May’s project of delivering a normative foundation for international criminal law. I start by summarizing the main arguments in three books and then isolate a few key themes that run through all of May’s writings: moral minimalism, natural law and defendant-orientation. The final part of the paper points to possible objections to May’s overall project. These objections are grounded in the observation that – despite its unique breadth and sophistication – May’s endeavour lacks an appreciation of the political dimension of international law. This charge is not necessarily meant as a fundamental challenge to the project, but rather as an argument to the effect that even the most elaborate system of thought contains blind spots that might warrant justified criticism.

We use cookies to ensure that we give you the best experience on judgepol.sps.ed.ac.uk. By clicking Continue without changing your settings, we'll assume that you are happy to receive all cookies on this domain. You can change your preferences at any time.

We use cookies to ensure that we give you the best experience on judgepol.sps.ed.ac.uk. You can adjust all of your cookie settings by navigating the tabs on the left hand side.

Strictly Necessary Cookie should be enabled at all times so that we can save your preferences for cookie settings.

If you disable this cookie, we will not be able to save your preferences. This means that every time you visit this website you will need to enable or disable cookies again.